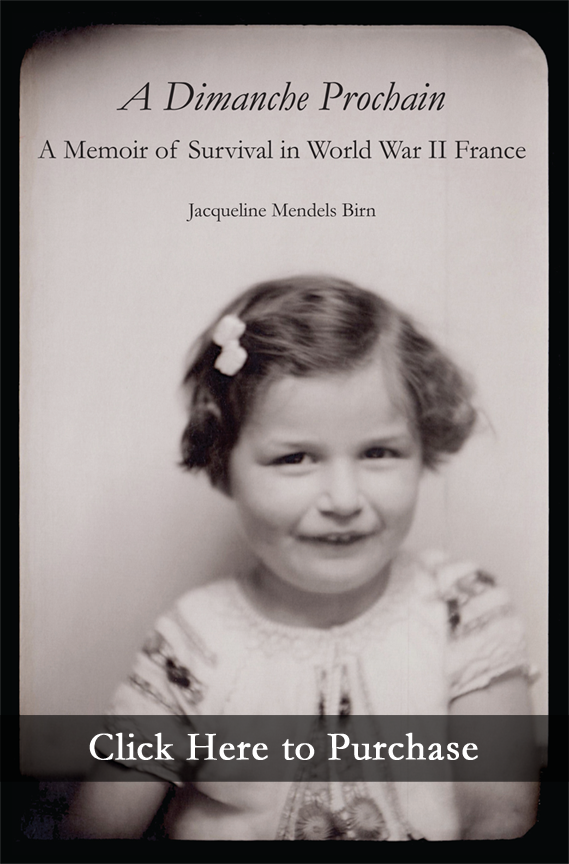 “Jacqueline Mendels Birn has written an impressive, moving story of her family’s remarkable survival in France during the Nazi occupation. It reads like a fast-paced novel, but there is nothing fictional about it. Indeed, her book should be required reading for anyone who wants to understand the dark history of France from its invasion in 1940 to its liberation at the end of 1944. Through her eyes and deft accounting we see history unfold. This remarkable story has all the best elements of our human existence – heroism, courage, and humanity.”
– Ambassador Stuart Eizenstat
Special Representative of the President and Secretary of State on Holocaust-Era Issues
in the Clinton Administration

“…a rare recounting of the survival of a Jewish family in Vichy France through a ‘conspiracy of goodness’…this thoughtful and loving memoir is a significant contribution to the history of Jewish survival in France during the Holocaust.”
– Liliane Kshensky Baxter
Director, Weinberg Center for Holocaust Education
The William Breman Jewish Heritage Museum

“Jacqueline Mendels Birn’s personal history of her survival as a Jewish child in Vichy France is as moving as it is engaging…. A Dimanche Prochain is a story that readers will not soon forget.”
– Michael S. Koppisch
Professor of French, Emeritus, Michigan State University

“Her memoir bridges the gap between past and present, becoming the symbolic sepulcher that her deceased family members were denied.”
– Audrey Brunetaux
Assistant Professor of French, Colby College